Icon Anastasis - The Harrowing of Hell 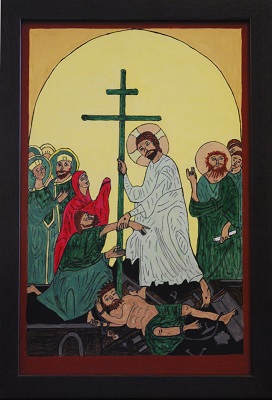 The iconic form of the Resurrection originally preferred in Eastern Orthodoxy was actually the event known in the West as the “Descent into Hell” or more colourfully, “The Harrowing of Hell” (harrowing, in the sense of harvest). The term “Anastasis” means “The Resurrection.” It is set in the depths of Hades under mountains, in which the “righteous” men and women of the Old Testament have been kept in prison by Satan, the Prince of Hades, and assorted devils. He grasps the “first man” Adam. Adam is held down by a representation of Satan, who is in chains. Eve is standing, her hands covered as a gesture of reverence. Various other Old Testament figures are seen, including (at left) Kings David and Solomon and John the Forerunner (Baptist) on the right. Jesus is shown in a shimmering robe, holding the cross and with one foot on Satan.