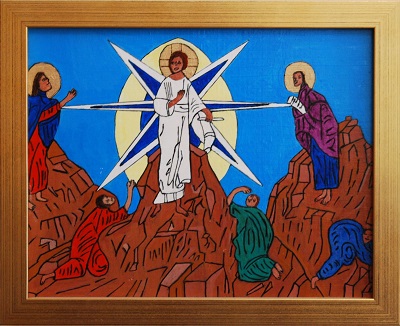 The light that appeared to the apostles was the recognition of the two natures of Christ, the divine and the human. At the same time, it was a prototype, an icon of the transfigured human nature and of the theosis (deification) that is granted to all of us by the redemptive work of Christ.

Moses and Elijah appear alongside Christ, like a trinity. Elijah appears on the left and Moses, holding the tablets of the Law of God, on the right. God had appeared to both of them: to Elijah on Mount Carmel and to Moses on Mount Sinai. These two prophets from among the greatest figures of the OT, appear to have a conversation with Christ: “and behold two men talked with him, Moses and Elijah, who appeared in glory and spoke of his exodus which he was going to accomplish in Jerusalem”. (Lk 9:30-31)

In contrast to the two prophets, the three apostles below the feet of Christ – Peter, James and John – are overcome by the awesome sight and revelation, terrified by what is happening and are depicted fallen. They are in positions of intense astonishment and being very agitated and disturbed, as Matthew records in his account: “When the disciples heard this, they fell on their faces and were filled with fear”. (Matt. 17:6)

The transfigured Christ appears high up in the middle of the icon, above the middle peak of Mount Tabor of Galilee. He blesses with one of his hands, while the other holds a folded scroll, where his Law is written. He is dressed with a white garment, the brilliance of the light; all this points to revelation, to the epiphany, to God. As St. John says, “God is Light”. (1Jn 1:5)

The “vision of God” was regarded by both the faithful Jews and Christians as the highest experience and virtue that a human being might acquire: “Show yourself”, said Moses to God. (Exod. 33:18) This experience, however, appears to be something unthinkable: “No one has ever seen God”, John writes in his gospel. (Jn 1:14) Here at Tabor the three disciples become the irrefutable witnesses of a momentary manifestation of the divine glory: “for we have seen his glory”. (Jn 1:14) Another purpose of the Transfiguration of Christ was to serve as the foretelling of the Resurrection.

The Transfiguration of our Lord who “wears the light as a garment” reveals the person of Christ, the beloved and transcendent Son, who possesses the same glory with the Father. It is also a reminder of the fact that man is made “according to the image of God”.

The message that this icon communicates to the faithful is that, since through baptism they have become participants in the mystery of the Resurrection (which is prefigured in the Transfiguration), they are called now to be constantly transfigured more and more by the grace of the risen Lord. (2Cor. 3:18)